What careers/roles exist in web development? How are they different from each other? What skills matter the most? Which ones are gaining in prominence, which ones are losing ground? What can we say about overall demand for web development jobs? Where are these jobs located?

Read on to know the answers! These results are based on mining a dataset of more than 28 million online job postings, for the period May 2013 to September 2014.

Note: This is a small sample of my work as head data scientist for SkilledUp (now defunct). Credits shared with Olivia Zhao.

I. Flavors of web developors

A. This is how they roles

Roles in web development fall into five clearly identifiable categories. They are listed below, along with popular alternate titles used for the same role. Levels within same role (Senior, Junior, Lead etc.) are not shown. Further, it is commonplace for web development roles to have generic titles such as 'Software Engineer'. To account for these, we identified job postings which listed several web development skills in the description and included them in the 'Other' category listed below, along with the actual title matches as alternate titles. 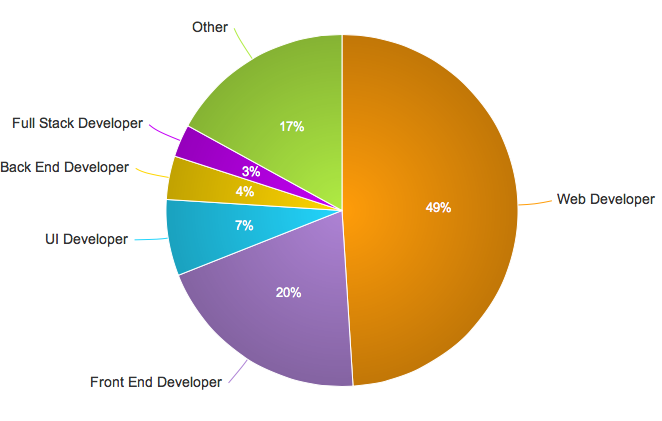 
C. So, what separates them?

Are these just fancy titles for essentially the same role? In other words, are the piechart and its companion table above fine illustrations of hair splitting? To establish the differences between roles, we look at i) the skills emphasized by each, and ii) salary statistics for them.

i. Skill break up

How important is a skill for a particular role? One measure for relative importance is obtained by computing the percentage of times the skill is mentioned in job postings for the role. The facet plot below compares this measure for each of the top skills across web development roles. It is observed that JavaScript, HTML, and CSS are the dominant skills across roles (Back end is an exception), followed by jQuery and HTML5. Java, Python and SQL gain prominence towards the backend, while UI and UX design-related skills gain in emphasis towards front end and UI. Interestingly, there are no clearly dominating skills for 'Backend Developer' roles.


By way of comparison, the plot below shows the mean salaries for these roles from Indeed trends, which are significantly higher than the median values shown above, indicating a longer tail in the distribution i.e. relatively small number of jobs with much higher salaries.

There is an increasing demand for specialized roles in web development. Over 2013-2014, relative demand for 'Web Developer' has been trending down, while 'Full Stack Developer' is growing fastest, with 'Front End Developer' also steadily rising.


Newer skills such as Angular.js, Backbone.js, CoffeeScript etc. were missing from the skills masterlist used for this analysis. A new list is being compiled and similar stats for all such skills will be available soon.

The plot below shows the relative importance of skills for all web development roles, aggreagted over May 2013 to September 2014. A minimum threshold of 10% has been applied. Note that Python (14%) and Ruby (10%) are at the lower end of the spectrum.

The aggregate relative importance numbers above mask the rise or fall in importance of skills, which can be seen in the plot below. It is observed that over 2013-2014, HTML5 and CSS3 gained in importance and are trending up, while PHP and Ajax are becoming relatively less popular and trending down. JavaScript, HTML, and CSS are more or less steady. 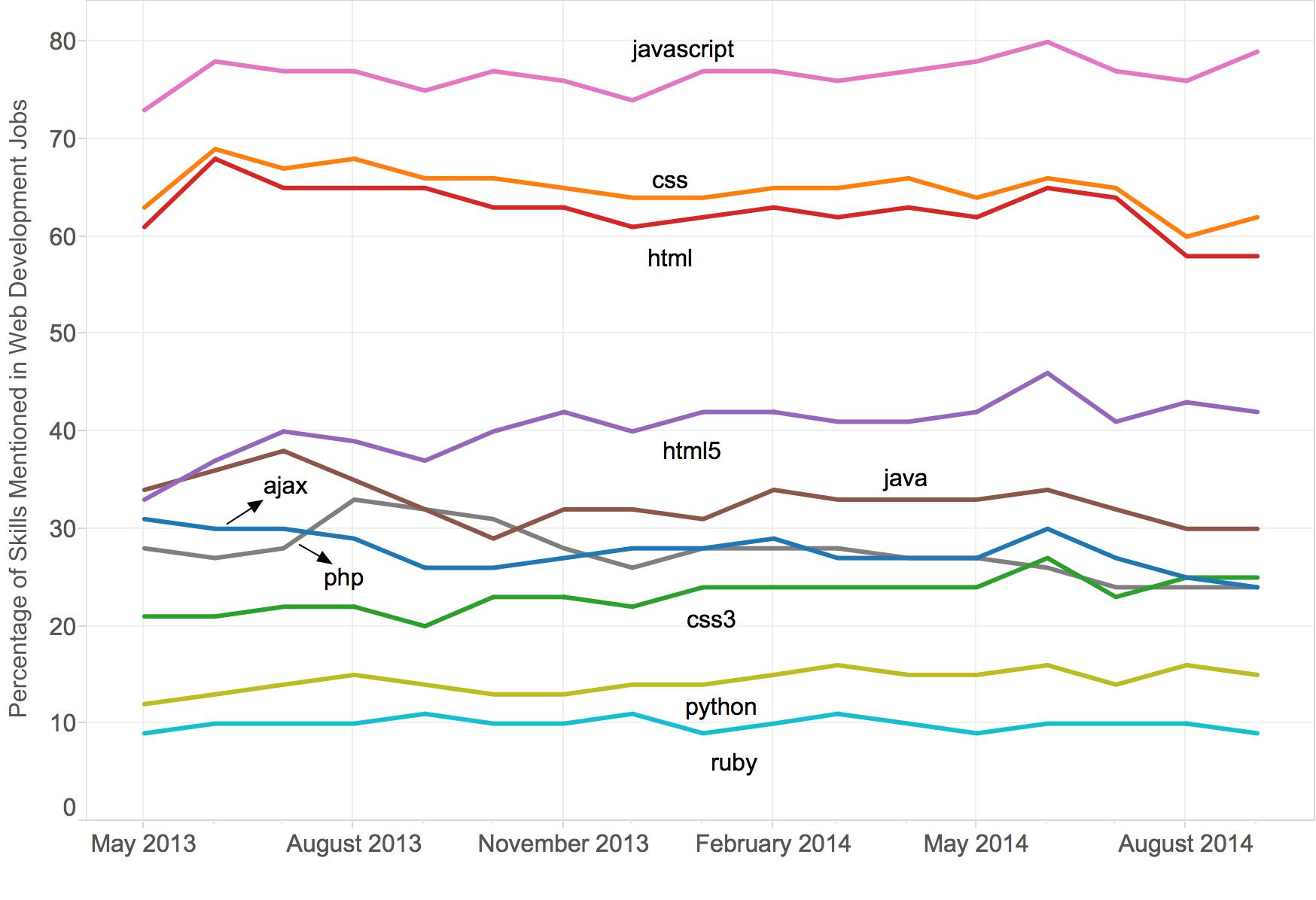 Web development skill demand trends from May 2013 to September 2014

All this is fine, but how many web development jobs are really out there? Where can you interview for one?

A. Overall demand, the long and short of it

The results shown above are mostly ratios, and have the benefit of statistical aggregation. On the other hand, absolute demand is currently difficult to establish. It is not clear how comprehensive the aggregated online jobs dataset we are using is, and there is no direct reference for comparison since job aggregator sites like Indeed and SimplyHired only put out '% of jobs posted' trends. Also, what is the fraction of jobs that are not posted online? Finally, we currently only have jobs data for about 18 months, and given the well-known seasonality in hiring, conclusions about growth trends will be on shaky ground.

For these reasons, the absolute demand numbers we have can be considered indicative. As seen in the plot below, with some variations, the number of web development jobs in 2013-2014 was mostly stable, with a smoothed trend of around 6500-7000 job postings per month. 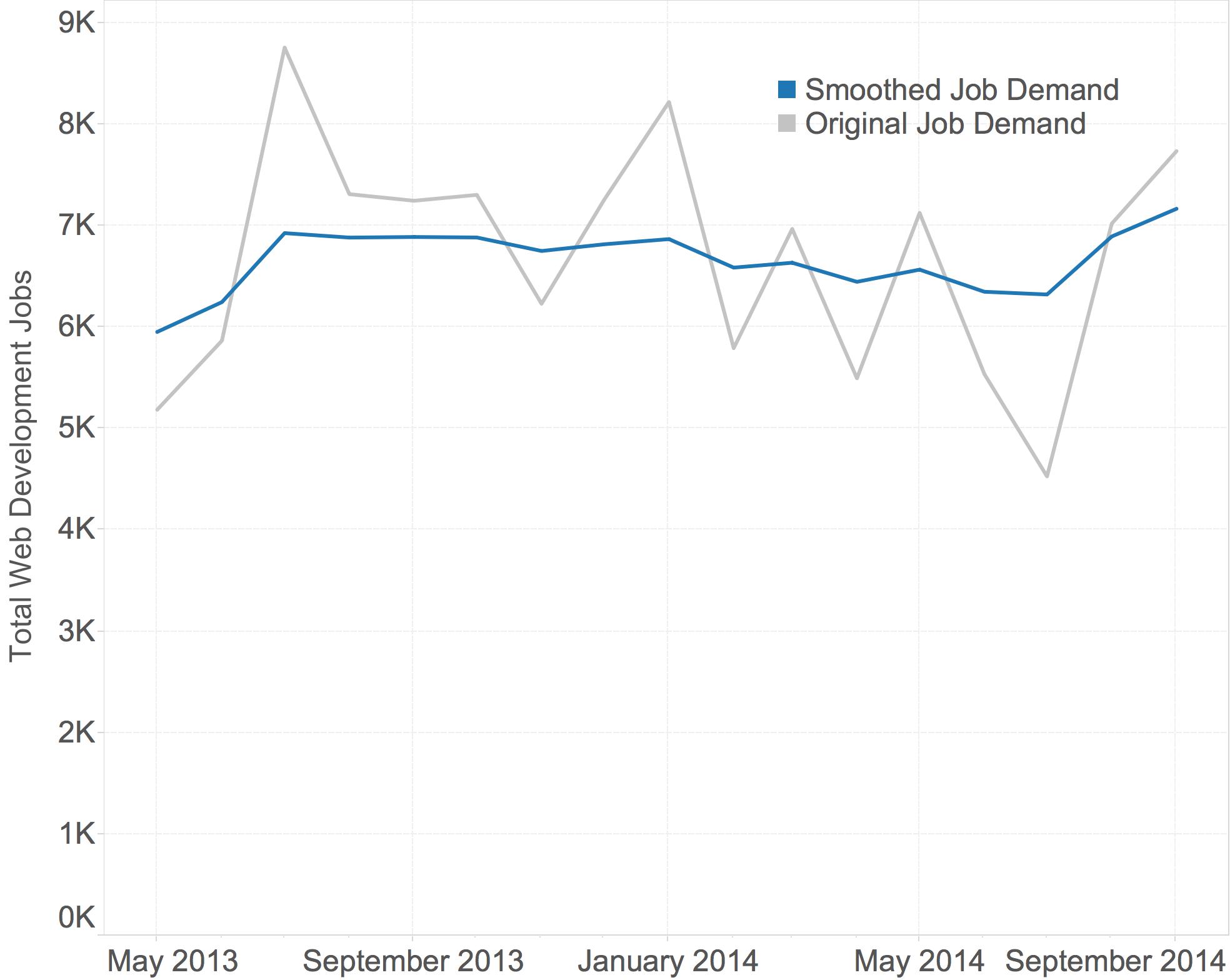 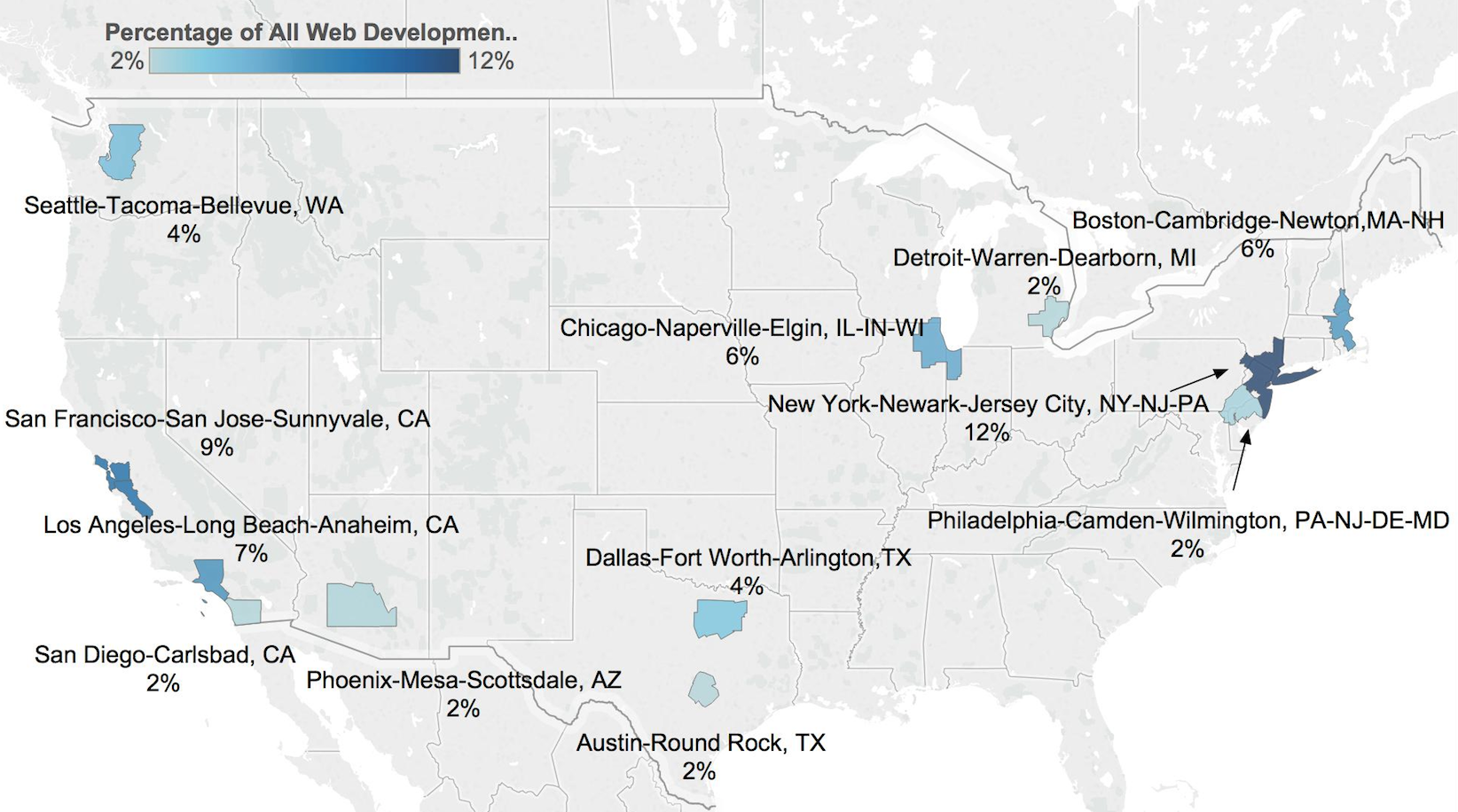